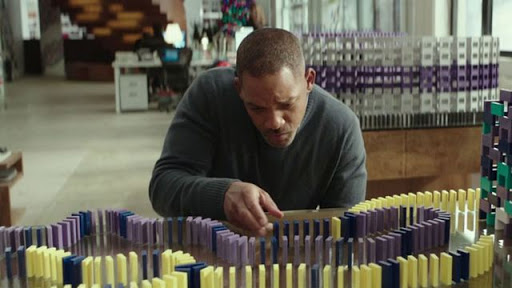 When you are losing your six year old daughter inside an intensive care unit and you are aware of the unforgivable fact that her life-supporting machinery is removed one by one, and the death is soon to be pronounced, what if you are told by a stranger, “Just make sure you notice the collateral beauty”? Makes sense? You may not get it at the moment, even partially, but it stays there; a wise provocation towards profound connections, indescribable mysteries, unfolding meanings. This was the mystical moment that drew me towards the movie Collateral Beauty.

Existential grief is a subject that we never get weary of talking in art and drama, and Collateral Beauty offers the same path. This time, it is about Howard, a successful advertiser losing his mind and passion for life after losing his only child. As depression and insomnia devour this lonely middle-aged man, who struggles clueless on how to handle himself from collapsing, he writes brief letters to Time, Love and Death. Three phenomenal mysteries humanity has endlessly wondered about. A truly philosophical moment in the plot, with immense potential to examine the depths of human mind and destiny.

But sadly, that doesn’t just happen. The plot’s possibilities are not exploited, except for the film’s impressive ensemble cast. The rest of the story turns out to be typical poor Hollywood drama. Three panicked partners of the protagonist, alarmed by Howard’s insanity bringing big trouble to the company they had co-founded and developed together, hire three actors to play Time, Love and Death and confront him with the letters he originally wrote. So that they could convince him about his mental state and get him back on the track. Strange idea, indeed! In a mental health perspective, it is even unethical to play games with a mentally sick person – particularly the part that they trick him into conversations and digitally remove the ones who initiated conversations. For the sake of letting the plot going, even if we agree, the sequences are dully developed. Despite the losing mind, given the intelligence and brilliance Howard must have had, it was a little pathetic of the protagonist that he easily buys the claims of the personified Time, Love and Death. And when you have a character who refuses to be part of the civilization and life itself, you expect his encounters with the eternal questions of Time, Love and Death to be authentic and profound; but they are not, no magic unveiled. What you hear is banal, superfluous chit-chat. They are hardly anywhere near giving you insight, let alone enlightenment. And the surprise Naomie Harris’ character stores to deliver in the end may make you frown.

Will Smith, one of the most adorable actors of Hollywood, is a permanent pleasure to watch. He is so profound that you often think he is giving a new layer of depth to this otherwise profound human story told in a shallow way. This movie needed more philosophical vision and imagination from director David Frankel and writer Allan Loeb. You can watch it for a feel-good, mood-lifting drama – as there are hopeful personal stories unfolding around every main figure – with illuminated Christmas trees all around in every night frame, and memorable performances. However, beyond that, if you needed substance, Collateral Beauty fails to deliver what it pretends to be offering.